Most Epic Etsy Feedback EVER So, I clicked the item to see how many sales she had, and then I started reading her feedback. I know it is Etsy-cliché to complain about the Etsy-cliques and who makes the front page, but being a fringe member with only my humble cult followers...er, I mean fans... validates my platitude.

Anyway, I noticed that her first few pages of feedback were probably more than 50% negative or neutral, which made me question the validity of Etsy's seller rating policies. I had to stop when I came across the most hilarious feedback ever from a buyer named Bacardistuff:

Well, I’ve had plenty of time to think about this mess so I’ll try to be as articulate as possible. I request a 22” b4 purchasing. I’m told it’s no problem as long as I type it on the order. I buy and write 22” on the order. I get 16”. I point this out via email and I’m ignored. Can you see where this is going? I eventually get a one-inch extender. I have zero idea what to do with it so I mailed THAT and the necklace back. I pay for postage, mind you! I’ve got the emails, mailing receipt and the original order. I can’t get my money back from paypal so I’m out one necklace and $20.50. That’s the bad news. The good news is that the seller obviously needed the $20.50 more than I did and I’m always happy to help those in need. In retrospect, it would have been a better idea if Erin’s dad had worn a condom. Now that I think about it, $20.50 can buy you a lot of condoms.
I wrote to this buyer to offer her an extender chain. I hope she accepts. I will keep you updated. It was the least I can do for the heroic feedback left by this courageous buyer who risked (and received) negative feedback in return from the seller. Way to fight the Man, Bacardistuff. 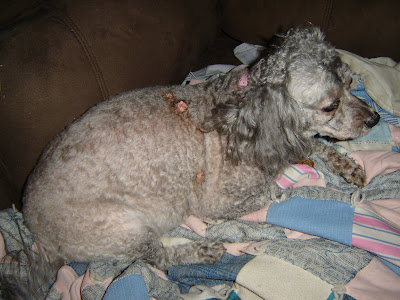 So, Bacardistuff allowed me to send her a silver chain, but she also bought a ring from my jewelry shop. I would be remiss if I didn't show this perplexing customer appreciation picture she sent me.
There was no message, no explanation... nothing. I don't know if this is her dog, or if this is a picture she found on the internet. I'm afraid to ask about it, because if it's her dog and I reply with "WTF" or "Someone actually put a pink bow on that dog?" then she could be really offended. I don't know if I want to shower, throw up, gouge out my eyes, or call PETA. What should I do?
Posted by WTF Etsy at 9:55 PM

Email ThisBlogThis!Share to TwitterShare to FacebookShare to Pinterest
Labels:critiques, wild side, tips The Wild Side of Etsy

Are you out of the crafting closet yet?