NorthtoAlaskaDesigns and SillyLittleGifts:
Okay, first impression is that you’ve got a great profile and shop announcement in both shops. You’re light-hearted, which complements the respective motifs of your shops. You also do a great job in explaining the intricacy of your craft without sounding arrogant.
The major issue, which is big enough for 2 WTF points, is that neither of your shops have enough items in them. You shouldn’t think about opening a second shop unless you have two totally separate genres of items and have at least 75ish of each. You need to consolidate your shops and just make a “miscellaneous” or “potpourri” section. Just put a little explanation that you are sometimes inspired by non-Alaskan stimuli. Just because it comes from you it still has an Alaskan panache.
I’ve never been a fan of seed beads, but I do like the clam and flower and butterfly appliqués. I just think I can’t justify the amount of time it would take to make something like that for the small amount of money it would yield. I’m not too big on the purses you have them on, either. Maybe you could attach them to like an iron-on backing or a pin so people could put them on the product of their choice.
I see you have a disclaimer about your photo quality in your shop, but your pictures aren’t that bad. It’s your backgrounds which detract from the appeal of your items.. Wood – especially a light grain of wood—or anything brown or khaki usually doesn’t look good as a background. Also, there is a lot you can do with your cheap-ass camera and lack of equipment to make your pictures a lot better. I know sunshine is a commodity up there, but you have to take advantage of it. You can change the angles, background props, and lighting to improve your pics. Also, a little photo-editing will really neaten up your images. For instance, I literally timed myself and it took 12 seconds to make this change on your Alaskan Forget Me Not Bookmark in peyote beadweaving stitch item.
Before & After: 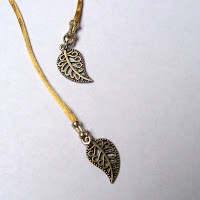 The after version isn't perfect, but it was such an easy change. And, NEVER USE FLASH!

Although... looking at your second page, it looks like your photography in reference to lighting, angles, and props/backgrounds has greatly progressed. You have some really good photos.

You certainly get a WTF point for the banner on your SillyLittleGifts store. The baby taking a nose-dive into a tub. I like your avatar on the Alaska shop, but the banner needs some work. The font is nice. I have that font... but the way it's integrated into the image doesn't meld into the design very well. Why the hell did you go with navy blue? Furthermore, when you have a busy banner, it's best to have some kind of border so that it isn't such a big, slapdash rectangle against the white page.

I have been dying to use the word "perfunctory," but the opportunity hasn't yet presented itself; therefore, I am using it in this declarative statement to purge the urge.

Are you out of the crafting closet yet?